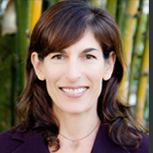 Nancy is a member of the Los Angeles City Commission on the Status of Women, a member of Mayor Garcetti’s Tech Council, on the Advisory Board of  the Women Founders Network and advisor to multiple female-led start-ups.

Nancy began her career in television, developing prime time programming with studios such as Sony and Spelling Entertainment. She graduated with a BA in Communications from The University of Michigan.